7 ways to reduce your waste, save money and make the planet happier. 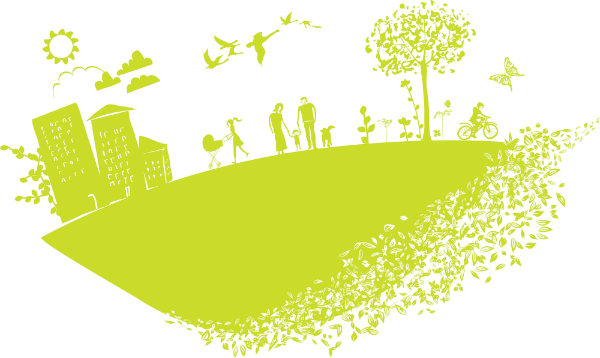 I recently visited Beijing, China. While I had an amazing time hiking up the great wall and visiting the ancient sites, on the last day I awoke to this view. 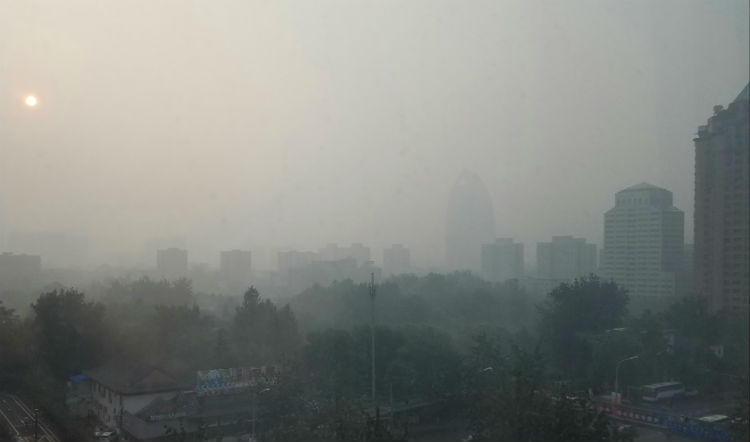 Now this isn’t your usual fog. In fact, it’s not fog at all.

This is smog and pollution hanging in the air, the unfortunate side effect created by a world and society far too dependent on burning fossil fuels.  That little white spot in the top left is the sun, barely getting through. We all know the inherent problems of burning coal, oil and gas but this was the first time I caught a glimpse of how bad it could be.

It’s not the most pleasant to walk around in either. I felt it almost instantly in my throat and nostrils as I walked outside.

For anyone who knows me, I generally try to live as “green” a life as possible. It’s something I’m quite passionate about. Experiencing the above in person really motivated me to share what I do to be less wasteful in my own life.

While this isn’t directly related to the usual things I write about… in a way it kind of is.

We could all be less wasteful and more efficient. This holds true not just for helping the planet, but all aspects of managing our daily time and energy.

I can guarantee you that when you really reduce the amount of waste and clutter in your life; it opens up the space to accomplish more. Plus you overall just feel lighter, which is always a good thing.

Control what you can:

In many ways cutting back on pollution is out of your hands but in a lot of ways it also isn’t.  People as a collective are quite powerful.

The idea is to control what you can. You don’t need to make a drastic change; a lot of little, simple changes can work.

I heard this term awhile back. It is one I’ve come to embrace and live my life by. It is an easy way to “control what you can”.

Vote with your money.

What does that mean?

It means if you don’t want to support an industry, don’t give them any of your money. Super simple but quite powerful. Companies generally can only exist if people buy their products and services. Nobody buying equals bankrupt company. Many companies previously laden with unethical practices have experienced fallout due to the advent of social media and stories being shared. It’s not easy to hide unethical practices anymore, which is a good thing.

I personally work very hard to not give my money to any of the following:

Now let’s get into what else you can control… 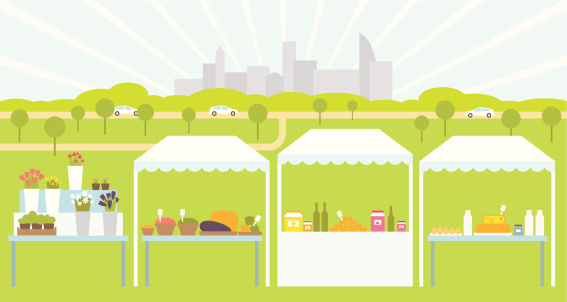 When you buy local, those apples and strawberries you got only had a brief and enjoyable 30-40 minute ride instead of hours or days locked in a truck.

Doing this also ensures the food you get will generally be higher in nutritional value as it will have been more recently harvested. (A lot of nutrition can be lost over the transport period). It’s better for you, better for the planet and better for the local economy where you live. A win for all. I can’t think of any city that doesn’t have a farmers market. What do you do when there is snow on the ground? A lot of cities have projects going on to utilizing greenhouses and aquaponics for farming so they can grow all year long. Fresh City farms in Toronto is a great example. They have a greenhouse in Downsview park where they grow organic produce all year long. I was a customer of there’s for years before I  moved to San Francisco and they are amazing. They also deliver it right to your front door so “its too cold out” is no longer an excuse.

This one will get lots of folks fired up so before you get up in a frenzy let’s first discuss what I’m not talking about here.

What I’m not talking about:

Farms that do things the proper way. This means smaller farms that grow pasture raised, grass-fed meat done in sustainable way towards the animals and the planet. When I do buy meat, I ensure it is only purchased from places like this.  They are better for both us and the world we live on. In the Western world most meat is not produced this way, but there is a growing trend for it as people become more aware.

What I am talking about:

You don’t need to cut out meat completely but there is no nutritional reason or need to eat meat every day. Plus when you reduce meat and start exploring other food options outside of chicken and beef you will discover a whole world of food. If I asked you the question , “when was the last time you went a day without eating a piece of meat” and the answer is “I don’t know”, it’s probably time to broaden your food spectrum.

The question every guy will want to know is what about my gains at the gym? I’ve personally  built muscle and burned fat, eating meat every day, eating meat 3-4 times per week and eventually (now) eating meat maybe once or twice a week.  There hasn’t been any negative difference any loss in my results or energy levels.  I eat primarily veggie based with eggs, kefir, Greek yogurt, lentils, legumes, sustainable small cold water fish (sardines) and a piece of meat or fish once or twice a week. Everything above more than satisfies the protein intake required. I also use some vegan protein powders to up my levels if need be.

How does eating less meat reduce your carbon foot print? There’s  a ton of information out there on this so I won’t get into it much. To sum it up, farming has become incredibly commercialized and industrialized over the past 60 years. In what used to be a relatively humble practice is now basically an assembly line of feeding and slaughtering animals to get them into stores as fast as possible. This has put incredible strains on the earth’s water supply, depleted soil of nutrients and released tons of methane gas into the air.

Want to cut your grocery bill in half and save money you could use towards doing awesome things? Reducing your meat is the fastest way to do so. The planet will also thank you and you may even live longer too (look up Blue Zones, which are the cultures who live the longest and the diet’s they typically eat. They usually do eat meat or fish, but sparingly).

Bring your own bags to the market / grocery store.

I am completely guilty of meaning to do this but getting half way there and realizing I forgot them. The simplest way to ensure you always do this, is to get a stack of them and throw them in the back of your car or near the front of your door if you walk there. A lot of cities now have started charging for plastic bags which encourages this, some have out right banned them like LA which is even better. I’m fairly certain in the short future we will see most cities outright ban them, which I am all for. We are all capable of bringing our own bags, the government banning them is basically there way of telling us to stop being lazy.

For the most part, every piece of plastic ever made still exists in some form on this planet.  That stuff takes generations to decompose. Plastic is either recycled, or more than likely, sitting in a landfill or floating in the ocean somewhere.  It’s quite easy for us to dramatically reduce our usage of it in our own lives.

Continuing from bringing our own bags above, there is a lot of other opportunities to really reduce the amount of plastic you throw out. Do you really need to individually wrap each fruit or vegetable in a little plastic bag at the grocery store? You are going to wash them before you eat them anyway. Throw them in your basket or cart and be done with it.   A lot of food can come pre-wrapped in plastic or styrofoam as well. It is usually pretty easy to avoid these and buy the same items on their own or in a paper bag (mushrooms).

Other easy way to reduce plastic:

Don’t buy plastic forks or plastic straws. Avoid anything styrofoam if possible. If you haven’t already grab a reusable water bottle. S’well bottles are the best. They will keep cold water cold even in blistering sun (I’ve tested this out, they are really effective).

Use your green bin and recycling.

You can probably get your garbage down to one small bag a week by using a lot of the steps above.  The idea should be to have the majority of your waste end up in either the green compostable bin or in recycling. The city of San Francisco has an amazing goal to be waste neutral by 2020. What does that mean? It means the city literally plan to send nothing to landfills, all waste will be recycled or composted into soil. As of 2016 – the city is currently recycling and reusing 80%  of all waste. They’ve done this by outright banning Styrofoam and other items which aren’t biodegradable as well as emphasizing heavy usage of our green bins.

Fun fact – A lot of the food waste from Green Bins in San Francisco gets converted into organic soil that is then given to vineyards in Napa Valley.

Much like buying local, buying foods grown in the proper season reduces the amount of transportation needed. It will also keep your body getting a fresh supply of varying nutrients as well as increase your culinary skills.

“Check out this honey glazed acorn squash I just baked, it’s local and in season!”. You will be speaking like a culinary master in no time.

The chart below from EatSeasonably gives an idea of what foods are best in each season. 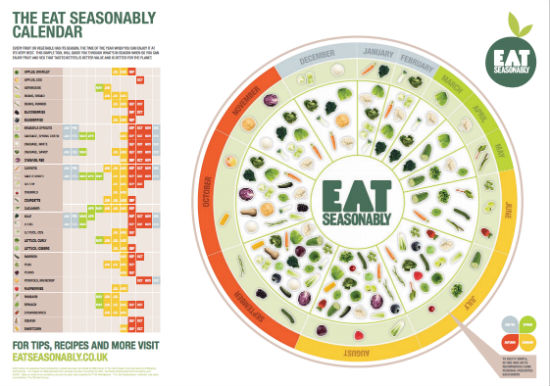 Check where your clothes are made.

This one was a new one to me. My mom also on a mission to help live a greener life introduced me to the documentary called The True Cost. It was an eye opener as I had no idea the impact the production of clothes in certain parts of the world was having. Both on the planet and on the people living in that area.

While I can’t do the documentary justice, the general take away is to buy clothes locally made within your country, or another first world country. If you see the tag saying made in either China, India, or Vietnam you can almost guarantee they were manufactured in a factory with almost no regard for the people who work there, or the environment.

Give Elon Musk your money.

His Biography is an inspiring and fascinating read.

Seriously, is there anyone else who almost single handedly is pushing the fight to get the world off fossil fuels and onto more sustainable energy?

He not only brought electric cars into the forefront with Tesla, he made them the best car on the planet to own. Electric cars have actually been around for over 100 years, but they never gained popularity due to technology not being advanced enough yet along with heavy pressure from the oil industries to shut them down.

I highly recommend reading this article in its entirety – How Tesla will change your life.  It is an amazing article that elegantly covers almost every detail of the history of energy consumption, how combustion engines came to be and how humans are influencing climate change. Oh, just an FYI – You’ll need a good 30 to 40 minutes to read it all depending how fast you read, but it is entirely worth it.